For anyone enthusiastic about athletics and wanting to watch some of the best domestic talent race around 25 laps of the track, Hampstead Heath track was THE place to be last night. After the success of last year’s ‘Night of the 10,000m PB’s’, Ben Pochee and his team at Highgate went one step further to deliver, what I thought, one of the best track events I’d ever been to. A giant TV screen, inspirational tunes picked by the athletes playing out, BBQ, beers, and 300-400 people cheering from lane 4, all helped to create a fantastic atmosphere for the 125 athletes competing across each of the 5 10,000m races.

A strong wind didn’t make ideal conditions for PB's, but the very fact that each race had been carefully seeded, meant that individuals were competing against others of a similar standard and hence likely to encourage faster times.

I was in the men’s B race and looking to break 31 minutes. I thought I may as well go for it at the start, use the group to help drag me around and, in particular, shield me from the gale in the finishing straight of each lap. This was fine up until 5k, which I reached in about 15:15, however the quick early pace hit me from 5-8k, where I lost the wind shield and started to go backwards. Despite the sub 31 target drifting away, the music playing out and crowds of people supporting on every lap helped push me along and I was able to pick up the pace for the last 2km, eventually finishing in 31:27. Slightly disappointed, but still a 2 minute PB on the track.

Then it came to the 2 main races of the evening, the women’s and men’s A races. Assembled on the start lines were athletes that have been to the Olympics, Commonwealths, World Championships, and several of which were aiming for a European Championship 10,000m to be held in Zurich this August.

Jo Pavey and Sophie Duarte took it out on the first half of the women's race, closely followed by Fionuala Britton. However it was the pace that Jo Pavey continued to knock out the laps at that eventually broke her away from the field to take victory in 32:11. This not only achieved the sub-33 minute Euro qualifying time but also recorded a W40 British record by over 2 minutes. 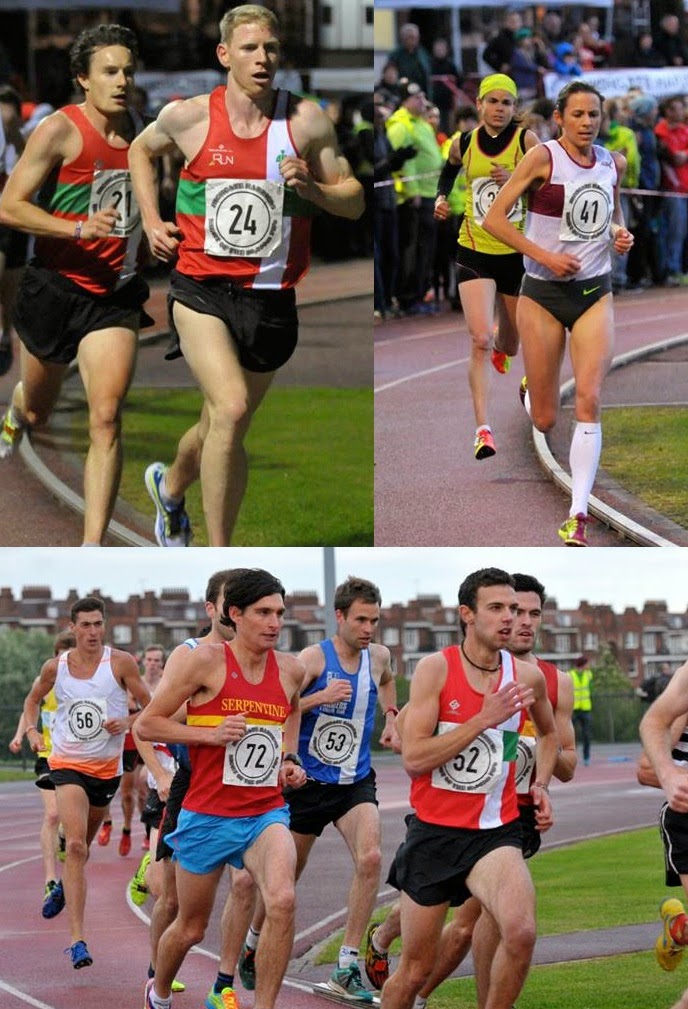 In the men's A race, the AFD duo of Andy Vernon and Chris Thompson pulled clear of the rest of the field early on and appeared to have a sufficient break. But Johnny Mellor worked hard to reel them in, at which point Andy Vernon launched an effort, broke away and started his run of 67ish second laps. The battles at both the front and mid pack were keeping the crowd entertained as the atmosphere on and around the track continued to build. However, on the night, Andy Vernon was a class above the rest, and obviously in great shape following his recent 13:11 5k, he clocked a 28:26, ahead of Chris Thompson (28:49) and Johnny Mellor (28:52) who battled it out for 2nd and 3rd respectively.

All in all it was great to see domestic athletics so well supported, and huge respect to Ben Pochee for organising the whole event. Hopefully there’ll be more to come again in 2015!
Posted by Andy Greenleaf at 10:50