After a slightly disappointing February and March, a decent 6 races in the past 3 weekends has given me the enthusiasm to update the blog.

Earlier in the year I’d steadily increased my mileage up to 80 miles per week, things were going well, I had plans to have a crack at the London Marathon and I had a string of good race results in January. However, I knew I was pushing the mileage too high and unsurprisingly soon found myself injured. Marathon plans abandoned.

So come the middle of March, I decided to re-assess my training and took on a ‘sessions only’ approach, whereby I’d run hard 3-4 times per week and replace any steady running with time on the bike or swimming. An unconventional approach, but if it means staying injury free, then I’ll take it. I’ve relaxed this slightly in the past couple of weeks and worked in some steady runs, but my training now seems to favour the bike, doing about 40 and 160 miles per week running and cycling respectively. This seems a bit convoluted given that I’m training for running races, but I find cycling out in Richmond Park in the morning before work is too bigger draw.

Anyway, here is a summary of my 6 races: 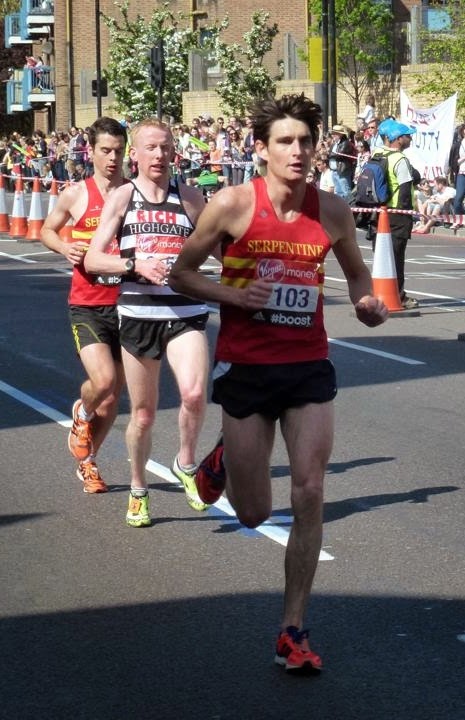 London Marathon (13/04/2014):  I felt like a little bit of a fraud lining up a Blackheath knowing that I was going to pull out somewhere between 13 and 15 miles felt, but conditions were great and I thought it was a good opportunity to put in a decent tempo run. I ran with my training mate Jonathan Poole and Highgate Harrier Richard Scott for most of it. These two guys know how to pace a marathon and and sticking to a metronomic 5:25 mile meant we hit half way in 70:48 and they went on to run 2:22 and 2:24 respectively. There was a small inclination to carry on and complete the full 26.2 miles, but I took the sensible approach and forced myself on to the side of the road just before the 15 mile point. Pleased with the effort and should provide some endurance without feeling the effects of a huge mileage.

Isle of Man
Did it really take 3 years to recover from my last trip to the Isle of Man? It’s a class place to spend the Easter break if you like running and drinking. A look at the entry list suggested competition for the Festival would be strong and so it turned out to be.

Port Erin 10k (18/04/2014): The Friday night 10k in Port Erin is the one opportunity where most people are completely fresh and have no ill effects from the day before. Conditions were near on perfect for the undulating course and, after an early breakaway by Adam Grice over the first 400m, the pace settled down. Despite a fair climb out of Port Erin, the leaders still went through the first mile in sub-5 minutes and a sizeable lead pack (8-10) stayed together and went through half way in about 15:30-15:40. At this point, Alex Short, Glenn Phair, Matt Leach and Will Mackay started to pull away from me and I became a little isolated for 7-10k, but knew that Andy and Dave Norman were only just behind and this helped force me to maintain the pace. The course continued to undulate in the second half of the race and there was speculation whether the slightly different route made it tougher than usual, however a steep descent back into Port Erin meant a quick run in to the finish where I came 5th in 31:41.

Peel 3.5 mile Fell Race (19/04/2014): Saturday afternoon in Peel is the venue for the 3.5 mile fell race. I’d not run a fell race since the last time I was here in 2011 and conditions were pretty similar: dry and breezy. The first climb is bloody hard work for someone used to running up and down the Thames Path, and I found myself in 4th at the top. The 10k winner, Alex Short, and my club mate and NZ mountain runner, Glenn Hughes, battled it out for much of the race ahead of me. I went into third spot ahead of Matt Leach at the top of the second climb, but the Cambridge guys took it out on the final descent and pushed Glenn and myself back into 3rd and 4th respectively. 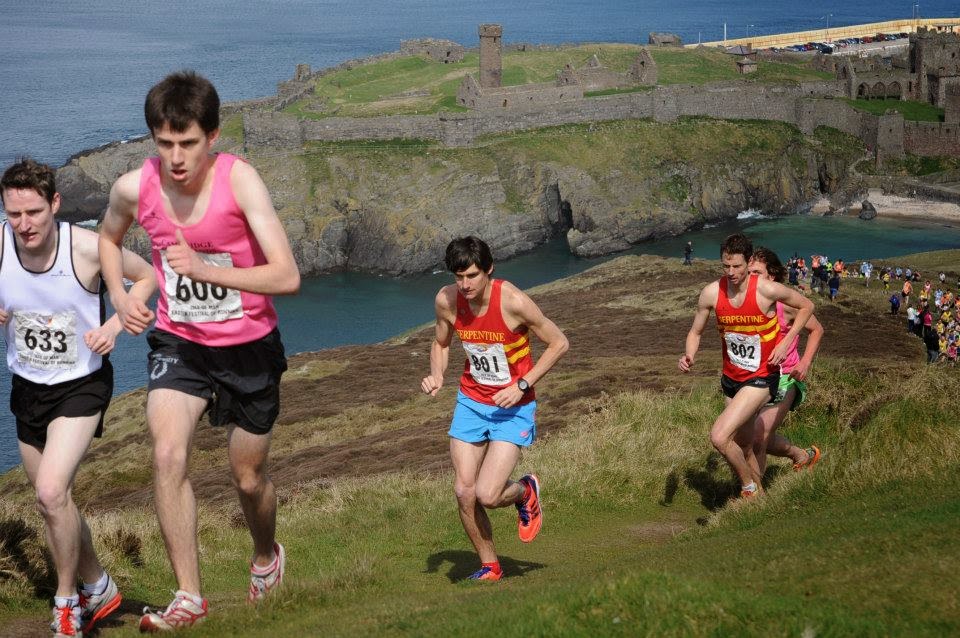 4*5k Relay (20/04/2014): Assembled on Douglas Promenade on the Sunday morning were a fair few blurry eyed runners ready to take on the 4*5km relay up and down the sea-front. The 10 mile pub crawl back from Peel coupled with the fell race was hardly the greatest preparation for a 5k, but mostly everyone was in the same state. A very strong headwind from Douglas out to the far end of the course meant that no one was that willing to take it on and hence we opened with a relatively slow 5:15 mile. At the turn around and as expected, the pace increased rapidly. Alex Short immediately put a decent gap between myself and Glenn Phair and went on to had Cambridge over in 1st place. The tail wind helped me clock a 4:39 mile on the way back, although I struggled in the final kilometre, getting overtaken by a couple of guys, losing a bit of ground on Glenn and eventually finishing in 15:31. By the third and forth legs, Cambridge and Doss were well up the road and took first and second respectively, whilst Serpentine held on to 3rd, only 10 seconds ahead of Manx Harriers.

Ful-on-Duathlon (27/04/2014): Given the fair amount of cycling I’ve been doing recently, it seemed sensible to have a go at a duathlon. The 6k/23k/6k race took place at Dunsfold Aerodrome, AKA the Top Gear track. My strategy for the race was fairly simple: go out hard on the run, ease off a little on the bike and then do the second run in as close a time as possible as the first. It more or less worked out that way; I think that the bike could have been a little quicker had I actually got the TT-bike set up right, but that’s what you get when its not ridden for the winter. I landed up finishing first about 3 minutes ahead of second, although my lap time was way off the pace to make it onto Clarkson’s list.


So a fairly busy last few weeks and, despite this, I’ve got no niggles or pains so this bodes which I’m happy about. The next race is the Highgate 10,000m where I’m aiming to go sub-31. The elite race (which I won’t qualify for) should be great to watch.