I started writing this blog post last week, however due to something that has happened in the last in the last couple of days, I’ve decided to split it in to two. (This will become apparent in the next post).

It’s been a while since my last update; the main reason for this is that the Virgin London Marathon has left me in pieces and hence there has not been much running to report on.

From past experiences, I knew that the marathon would take a lot out of me, yet I was still optimistic that, 5 weeks on, I’d be capable of racing the Bupa London 10,000m on May 27th. In reality, things have turned out slightly different and I’ve not run a step since the marathon due to a tight back and hamstring.

Okay, if I’d not run London, I’d probably be running again by now, but I don’t regret racing the marathon at all, nor do I regret racing any of the 20+ races I took part in from September 2011 – April 2012. Every single one had a purpose and overall they have given me a huge amount of confidence in understanding what I can achieve.

So its meant that the month of May has been a period to let my body recover from running, do some cross training, cycling and concentrate on stretching and gradually build myself up to be able to run again.

With the fantastic weather the UK has had over the last week, I’ve been able to get out on the bike on several occasions, heading out to Box Hill where the Olympic cycle race is taking place, or riding around Hampshire, or heading up to Regents Park in London after work.

Last summer, again while not able to run due to injury, I spent a large number of evenings cycling around the 3 mile Regents Park loop. Groups of cyclists, strangers to one another, tend to form there either when you stop at a red light or simply pick up other cyclists as the ‘peleton’ goes by. 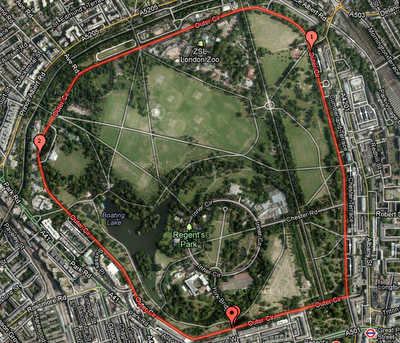 Cycling in a group is a lot of fun and, through taking it in turns to ride on the front, you can switch between pushing hard and taking it relatively easy. In fact, by drafting the person in front, cyclists can save up to 40% of the energy used compared to cycling alone. This really helps you to appreciate why Mark Cavendish is not ‘launched’ off the front of the peloton until exactly the right moment. As a result your average speed is significantly faster that if you were riding solo.

However riding in a group is not as straight forward as it sounds and does take a bit of practice. In order to benefit the most from drafting the person in front, you need to stay as close as is safely possible to their back wheel, while also be aware of any quick changes in pace or positioning in the road. Therefore cyclists have certain arm signals to illustrate to the rider behind whether the group is slowing, for example if there is an obstacle in the road to avoid, or if there is a drain/pothole/poor piece of road surface.

All this works fine and crashes are rare, but its impossible to prepare for completely unpredictable scenarios……
Posted by Andy Greenleaf at 12:01