After 5 weeks of not running, I’d built myself up for my post-marathon return on Sunday 27th May. The rowing, cycling and swimming I’ve been doing has helped keep a good level of fitness and that, combined with a bit of speed work, should have got me back to running more or less full speed by July.

As I mentioned in the previous post, I’d been hitting Regents Park this week on the bike, and Wednesday was no exception. There were loads of cyclists out there that evening and, at one point, the group I was in had got up to 8 people (that is a lot for week night in Regents Park). Anyway, riders had come and gone, and I was in a group of 3 keeping a fair pace. We’d been averaging well over 20mph and it was my turn on the front.

There’s a part of each lap that is gently downhill and the group of us were cycling at 25+mph down this section. In a split second, I remember 3 distinct events: firstly, a car suddenly appearing in my way and me having the realisation that I was heading straight into it; secondly, smashing into the car, being thrown into the air an thinking to myself ‘please don’t land badly’; and thirdly, that impact on the ground, with my immediate reaction to check, and so thankfully feel, that my arms and legs were still able to move.

I was in a lot a pain and my body pretty beaten up, but surprisingly had very few cuts.  I had however left a massive dent in the car I’d hit (I’d love to get a picture of that to see just what impact I made), and I can only think that that the car had taken away most of my speed so that when I actually hit the ground, I was hardly moving forward and hence avoided any abrasion on the road.

The reaction of the public was amazing. Within the space of a couple of minutes, a doctor was checking my breathing, an anaesthetist was making sure my body was completely rigid and was holding my head in a firm position (a major concern about these types of crashes is the impact on the neck/spine from any movement, even after the event), I’d had a load of clothes and blankets thrown over me, my family had been contacted and the ambulance was on its way.

The paramedics arrived, took over, gave me a neck brace, put me on a board (this is a completely rigid stretcher which prevents the body from moving) and took me off to University College Hospital. I had loads of checks on my back, neck and stomach, and remained on the board for hours until the x-ray results had come back and the doctors were sure that there were no spinal problems.

I was discharged from hospital the following day with a suspected broken wrist and very inflamed right quad and glute. Running is back off again and round 2 of the post London Marathon rehab is underway. At least that gives me 4 months until the cross-country season starts!

I am so grateful to everyone that helped me: the guys who I was cycling with (who I’d never met before) that got in touch with my family, looked after my bike and checked how I was doing the following day, the anaesthetist who refused to stop holding my head in one place until the paramedics arrived, the off-call doctor who did a first assessment of my injuries, my sister who came to A&E to hang out with me until I went up to the ward, and all of the people from the emergency services.

Don’t let this deter you from cycling, just be careful and always wear a helmet. I’m certainly going to be back on the bike as soon possible. 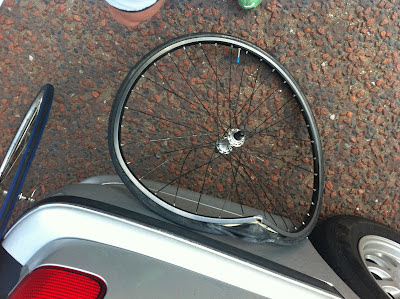 This is my front wheel. And below is the car damage 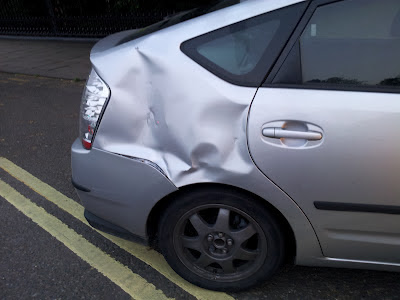