Kona Ironman - Going all out on the Big Island

Since I secured my place at Kona in September 2015, exactly what the event would be like had remained a mystery. I kept hearing of places such as ‘The Queen K’, ‘Ali’i Drive’ and ‘The Energy Lab’ with no clue as to what or where they were. I’d heard it would be hot, windy, humid and filled with over 2,000 budding triathletes; well think extremes: very hot, very humid, very windy (in places) and so many competitors focused on their single most important race of the year (or even longer). Arriving at Kona 7 days prior to the race meant that I could find these mysterious places, acclimatise to conditions and focus on relaxing, registering, racking and generally preparing for the race.

I took my approach to the entire Kona experience similar to how I approach my training. Yes, the Ironman was the main focus of the trip, what I had been working towards for the past 6 months and I was ready to give everything on race day, however I was also here to have fun both before and after the race, meet lots of like-minded people and get involved in everything Kona had to offer. Whether it was swimming out to the coffee boat, doing the underpants run, hanging out at breakfast, taking part in the Parade of Nations, or just lying in the sun, these were all things that would give me fond memories of the place regardless of how I may perform on race day, and besides who knows if I would ever have the opportunity to go back again. 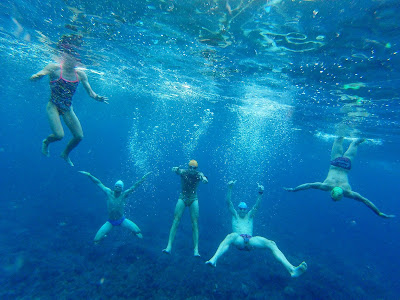 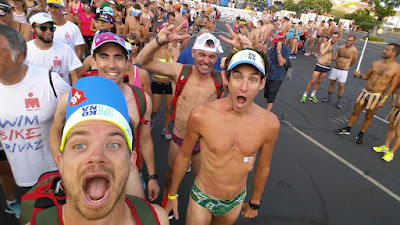 Race day was on October 8th and it started at 4am for me. By 5:30am, I found myself amongst the 2,300 other nervous competitors preparing to start their race. I was desperately trying to ignore a slight virus that had come on a couple of days before, and that would eventually catch up with me on the day following the race, but first of all I had 140.6 miles to knock out. Here's how the race went....

What's it like to be amongst the best part of 1,500 swimmers all heading for the same buoy 1.2 miles out to sea and back again? Well imagine a whole lot of splash, constant concentration not to get kicked, and no idea if you're heading the correct way; with all this continuing throughout 60 minutes of the swim course.

At 6:55am, the cannon fired.  Immediately I chose to go out relatively hard in order to try to find some faster feet to pull me along, and there was certainly no shortage of them, as pair after pair would continually appear in front or to the side. The carnage that followed was something I’d only ever experienced at Nice Ironman in 2010, where the sheer number of people in the water meant no let up in pace and using such concentration to avoid being hit. It was relentless and, even after 20 minutes of swimming, very little had calmed down. As we reached the turnaround point, the entire field was once again pushed together into a narrow stream. Despite everything going on around me, I felt good and a quick time check at the halfway point suggested I was close to my 60-minute target.

After the initial excitement of the start, I had chosen to take it more steady in the second half, not risking the thought of surfacing from the water at all out of breath. As I emerged from the water and into the packed changing tent, I saw my time was 61 minutes, on target with where I wanted it to be.

Coming out of T1 in amongst hundreds of other cyclists, I planned to go very hard and pass as many as possible early on. Who knows what power I was doing, as my power meter was broken from the outset, but it must've been 300-330w. Along the initial short out-and-back, I caught Will Newbury, had a very brief chat as we compared our swim efforts, before heading up on to the Queen K and the view of still hundreds of cyclists stretched out ahead of me.

I continued to put down a fair effort, being very mindful of not drafting anyone and trying to catch some faster trains up ahead. Eventually I caught up with Paul Burton and we sat off the back of a small peloton, cruising steadily down the Queen K. After 30 minutes I felt ready to push on and put in an effort to go past the lot of them. Whilst I potentially paid for this later on, it was my call to race up to the turnaround point at Hawi. My lack of confidence to go much over 35 mph was going to slow me down on the return descent, and I felt I needed to get some time in the bank as a consequence. 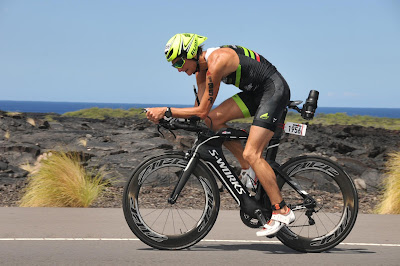 80 miles in I was feeling good. I'd gone through at least 5 litres of water/Gatorade, a load of shot blocks and a Clif bar, so was well hydrated and fuelled by my standards, plus I’d had made a fair dent in the field. However the headwind and 'semi bonk' was about to hit. Paul came back past me looking very strong and gestured me to go with him, but I had nothing. That had been a very sensible ride from him, and his decision not to get over confident early (on as I had) was a wise one. The last 15 miles were a real struggle and I was pleading to myself for the run to come sooner. I eased up, which may have lost me 5 minutes in the closing stages however I felt that, by taking it steady, I was far better prepared to start the run.

Now all that remained was the 26.2 miles between myself and the finish line. No mechanicals to worry about, no real possibility of penalties to be handed out, and the best part of 250 other age-groupers to try to work through. By this point, the temperature was well over 30 and I was grateful of the locals spraying us down with hose pipes on Ali’i drive; I was drenched through within 5 minutes, but that was fine.

My aim was to set out at 6:35/mile pace, which should feel comfortable on any other day, and that would bring me in with a 2:53 marathon. Along Ali'i drive I passed Paul, who encouraged me to go and eat up as much of the field as possible.

The atmosphere along the whole of Ali'i drive was fantastic, both from the spectators and other competitors. I'll be honest, I could hardly muster an acknowledgment but the support was much appreciated! As I progressed up the Palani Road (the only major climb on the run), the heat was getting to me and all I was longing for was the next aid station to fill my suit up with ice and take on more Coke and water; this was the strategy I then adopted for the rest of the run course.

Whilst my pace wasn't quite the 6:35's planned, I continued to work through the field and each competitor became a target to chase down. At 15 miles, I was told I was the 35th age-grouper and, by the time I got to the Energy Lab at 18 miles, I'd moved up to about 20th. Things were going well however the irony was that, shortly after coming out of the Energy Lab, I was so close to falling apart.

Now it was a case of just closing out those last few miles. I looked behind and the road was clear. Up ahead the gaps were too large. I accepted that little could be done on changing my position and so put my head down and prepared to head for home. With 300m to go, and to my surprise, another competitor, who’d obviously gradually been reeling me in, overtook me. I wasn’t expecting that, so cue a Greenleaf sprint for the line and any of the planned high-5'ing down the finish shoot was scrapped. Over the line I collapsed into a volunteer's arms, relieved to have held my position and finished in 9:08:27. I was too delirious to fully appreciate what was going on around me and was more focused on trying to stay upright and taking on water, but at last I’d completed the Kona Ironman. 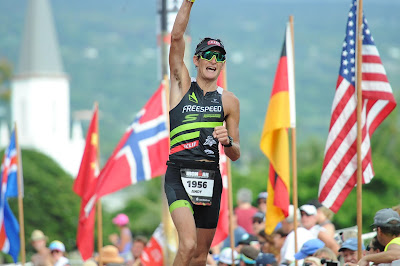 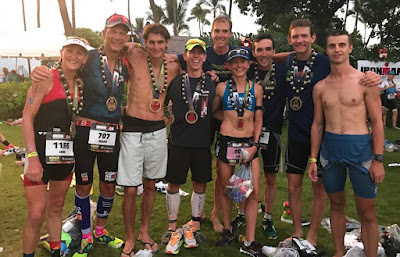 I finished 53rd overall and 5th in the 30-34 category (turns out 6th place was only 14s behind, so the sprint was worthwhile after all). The whole event was an eye opener to the quality of other amateur triathletes from around the world, and also an appreciation and respect to those professionals who swim, bike and run some frankly insane times.

My race had gone perfectly up to 95 miles on the bike, after which I'm still a little frustrated about the time I lost in those closing miles. Perhaps I over did it too early on the bike or perhaps I didn’t get my fueling quite right, but my feeling at the time was to go for it and this required overtaking some fairly significant groups. I also think I slightly underperformed on the run, however there is little preparation you can do in the UK (or even anywhere) to understand quite how to fare in a marathon of 30+ degrees and after 6 hours of racing. I appreciate I'm probably being over critical of my performance, and I am thrilled with my effort as I left everything out there on the course, but it gives me an appetite to go back for more at some point. 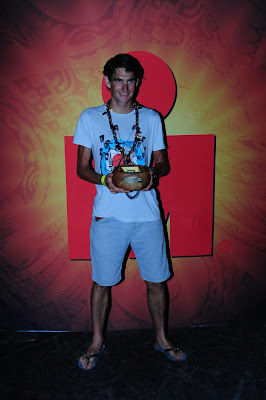 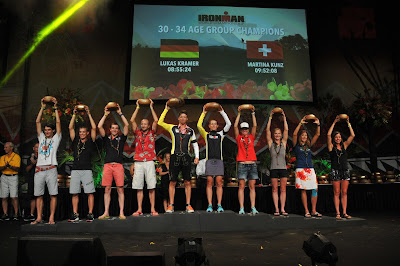 Kona was more than just a one-day race, it was the culmination of training for the past 6 months, and there have been a number of people who have supported along the way:

Huezkateers/RP Stags/Cottage/Pub Laps for pulling me around many laps of Battersea, Regent's and Richmond Parks, either running or on a bike. Thanks guys for putting up with me for all those hours, there’s no way I’d have had the motivation to do this solo.

Mum and Dad for being there right from my qualification at Ironman Wales and then coming all the way to Kona to support. I’m so pleased you were able to make it out here and cheer first hand!

Richard and my Teammates from Freespeed. Since joining the team at the start of 2015, it's helped to give me opportunities to compete in races I’d never even considered doing 3 years ago. Along the way I’ve had the chance to meet all sorts of people across the sport, whether it's other triathletes, sponsors or just others interested in the sport. Having teammates to draw upon for advice and support has been extremely valuable, not only for Kona but also in the lead up and I’m sure all this has helped enable me to racer stronger.

Thanks to all of the individual sponsors who support the team and allow me to train with the best kit and nutrition. Brett and the team at Skechers for providing us with fast trainers and all the support for the team, the team at Clifbar for all nutrition during long bike rides and races, Virgin Active for the use of the gyms and enabling those painful Wattbike sessions, Blueseventy for wetsuits and everything water related, Speedfill for all the equipment to carry water and tools on the bike, Lezyne for all the tools, Precision Hydration for providing electrolytes which are especially helpful when it's Hawaii hot, and Endurance Conspiracy for great clothes to wear to races.

And finally to Anna for all of your support along the way, and for helping me balance and appreciate so many other things to life. I would have loved to have you there on the day, but your enthusiasm and encouragement never ceased, all the way to the end of your very own Kona party.
Posted by Andy Greenleaf at 14:18