Finally got the Ballbuster record

For the past few years I’ve been making the journey to Box Hill to take on the Ballbuster Duathlon - an 8 mile run, 24 mile bike, and 8 mile run. Since the first time I competed, I have had half an eye on the course record of 2:34:40 set by Gary Gerrard back in 2001. The technicality of the cycle course and conditions of the road mean that poor weather can really effect how aggressive you can take on the bike.

Having driven the wet course on the morning of the race, noted the large amount of debris covering the surface, and then been warned about having deep rim wheels on my bike due to the wind, optimism was wearing thin for having a crack on the record. I was slightly pre-occupied with a focus on finishing the bike safely as opposed to an all out effort; but I’d still give the record a crack.

The first run was fine, and made sure I did not go out too hard given the length of the race. I also used this leg to check out the road surface, any potholes and where I should be position on the road for the bike leg. I’ve been doing some slightly longer reps in training recently and, combined with some high mileage, felt this gave me good speed-endurance for the race. I was pleasantly surprised to finish in low-42 minutes having run the first leg solo.

I chose to go for a road bike with deep rim wheels and some aero bars. My rational was partly due to my TT bike currently being out of action, and partly due to having more control on the road bike. In fact, I personally think I’d use this set up on this course regardless of the conditions. The descent through Headley village had to be taken very carefully given the amount of debris on the road, and much of Longbottom Road had leaves across, and I was weary of not taking any risk. Given this, I decided to save my hard efforts on each lap for the ascent up Box Hill.  My bike split was 1:07, bang on what I’d estimated was required for a record, but I was more relieved to finish without incident. 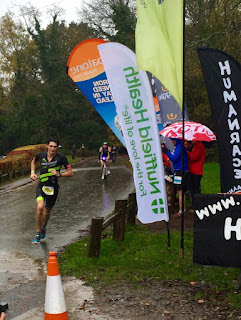 I knew I needed a 44-ish second run for the record, and I split the final run course into 3 parts: the drag up to Headley Common, fast back section along Longbottom Road and one final effort up the Box Hill climb. It took a mile or so to get my run legs back, and after that I dug in and pushed on to Headley Common. I had plenty of encouragement on the way round from other competitors on the bike leg. The back section was fairly pacey, but this is not surprising givne the gentle downhill. As I hit the foot of Box Hill at about 2:22, I thought an all out effort was required for the last couple of miles. However it turns out the climb up Box Hill was a little shorter than I’d anticipated, and I crossed line with a 41:30 second run split and total time of 2:31:56.

I was delighted to finally break the record and it rounded off a successful end to 2015 multisport. Now I’ll focus on road and cross country racing over the winter, before starting the build up to Kona in Spring 2016.