Over the past couple of years, Reading Half has become to establish itself as a Half Marathon that not only attracts over 15,000 runners, but also a good number of those are at the sharp end. Training over the past month has gone well, and my run at last week’s North London Half gave me confidence that a time of 66:59 might well be achievable.

Conditions were good: sunny and only a little wind. The pace off the start line was crazy, however I decided to sit at the back of the lead group to get some shelter from the wind. The climb at 3 miles strung out the lead group and I soon found myself (unsurprisingly) struggling to maintain the sub-5 minute mile, and electing to sit at about 5:10 pace instead. A group of Nick Torry, Dan Thorne, Joe Morewood and a few others formed and that certainly helped me maintain my pace. At 4-5 miles and on the verging of slowing up (thinking I’d gone off too quick), I forced myself to stick at least on the back of the group and maintain the pace a little while longer. 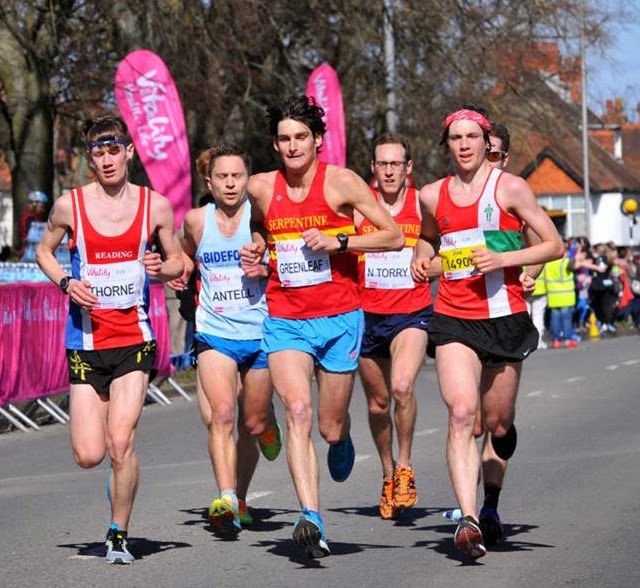 The route continued into the town centre, past a number of bands and a fair number of supporters coming out to watch, and by 7 miles I began to feel good. The odd runner, who'd probably had started a bit more sensibly, would come past our group and then get sucked back in and we were also reeling in a few other runners ahead. Just prior to the 8 mile mark, I hit the front of the group and then up to 10 miles, Joe, Dan and myself switched positions at the front as given the slight head wind.

At 10 miles, Chris Buselaih came past and put in an injection of pace, which also coincided with the course changing direction and being followed by a tailwind. The final run up to the Madjeski Stadium was so contrasting to last year’s massive headwind and dull day, and instead saw a group of group of us eagerly trying to race to that sub-67 time.

Nick Torry just upped the pace at 11.5 miles and went off the front, whilst myself, Chris, and few other guys raced for the end. Disappointingly the clock showed 66:51 as I entered the stadium and so my sub-67 target was out of the question, but I still finished in 67:08 for 20th and gave me a pb that has taken almost 3.5 years to break, so happy with the time.

The men’s race was won by Amos Kiplagat in 63:09 and the women's race by Lily Partridge in 70:32. However it was also good to see the depth of the race with 57 men dipping under 70 minutes.

With 5 weeks to go until the London Marathon, I feel as though I am returning to the form I had in 2012 and I’ll need to make some decisions about the sort of pace to go off on the big day.
Posted by Andy Greenleaf at 11:01