I’ve not concentrated and prepared so much on a race since the London Marathon 2012, so its not surprising that, in the past few days, I’ve been feeling a combination of nerves and excitement. Today started early catching the N19 night bus, along with a few dishevelled part-goers, to Hyde Park and then preparing my bike in the dark ahead of the race. It was cold; in fact the air temperature was so cold that the organisers shortened the swim by half to 750m. Personally I felt as though this played to my advantage and was relatively unfazed by the decision. As it happened, by the time my wave started at 7:45, I think it would have been fine to swim the full distance, but the decision had already been made. The great thing was that it was dry, not windy and we had clear skies to race in.

I’d been told to go hard from the gun on the swim, so I tried my best to latch on to someone else’s feet and gradually work my way through the field. The usual barging and bashing continued up until about 500m, and it was only towards the end that I managed to pull myself clear of it. I must have finished the swim in about 15th.

Transition was long, both in terms of how far you had to run and the time it took me to take my wetsuit off. Needless to say, mine was far from textbook and there is still plently of room for improvement there.

The bike course was fantastic; riding down Birdcage Walk, Whitehall and the Embankment all on closed roads. Frustratingly I did not have my Garmin on, otherwise I’d have definitely been out Strava segment hunting! Although I am strong on the run, I knew there would be other triathletes out there capable of posting a sub 33min time for 10k, so the aim was to try to make as much time up as possible on the bike. I went past Danny Russell (Highgate runner who I knew had run a sub-15 5k this summer) after about 8k and felt as though I needed to finish a good minute ahead of him on the bike given his running ability. At about 10k, I went hard over a bump and my seat post dropped by about 1.5 inches, which didn’t seem to impact my speed too much, rather it just made my bike position a little uncomfortable. I finished the bike in about 10th, ahead of a sizeable group of riders and then hit the run.

The run course was busy from the other waves, although there was still plenty of space to pass people and I so worked my way through the other runners. After just over a lap, Danny Russell came past me and I tried to keep up with him, but he was just too strong. It did give me a target follow and I made it my aim to keep him in sight. There was a lot of people out there cheering on the course and apologies if I didn’t acknowledge everyone supporting that I knew, lets just say I was well in the zone by this point. I didn’t feel as though my pace slowed throughout the run, in fact I finished with a sprint crossing the line in 1:49:33 which gave me 6th place in my age-group, 18th overall and 7th out of the Brits. A great day out, event and experience all round!

I’d certainly like to do more age-group races again and hopefully it’ll lead to other multisport opportunities. I’ve had a lot of help along the way, in particular from Alan Murchison for helping arrange a time-trial bike and some pacey cycle rides, my firm Capco for their support towards a time-trial bike, my parents for helping with all sorts of logistical things around training, my training mates for joining me on any cycles or runs, and all the support today to help get me round. Thank you! 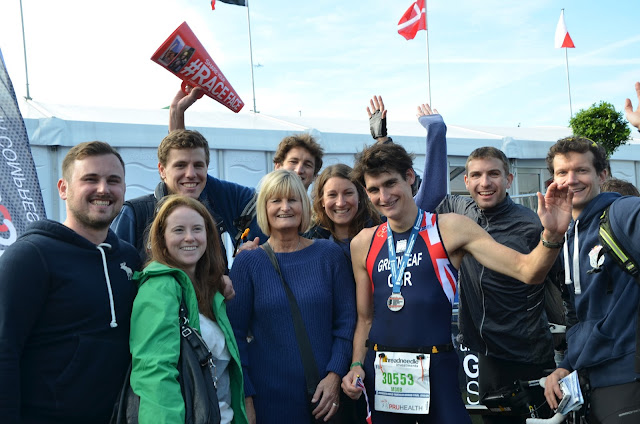