Racing back to fitness

Back in November 2012 I went to the Canary Islands for some warm weather training. Having had good week of running, 2 days after returning home, I started to get to a nasty pain in my lower back. Initially I thought I’d just strained a muscle from overtraining and it would recover fairly quickly, however the pain persisted through December and January. I was not able to run during this period and, despite several trips to the physio, the pain was not going away so I eventually got scan. This revealed a stress fracture in my sacram (a bone in the lumber region of the back); at least I now knew the problem and it would be down to me to assess when I could get back to running again.

I find it hard to completely give up exercising while injured, so over the period of December to mid-February I concentrated on other sports. A typical week included a long cycle out to Box Hill at the weekend, a couple of swim sessions and 70k a week rowing on a Concept 2. I had no idea how the latter would provide benefit to running as it mostly works other muscle groups, however I find it to be the only way I can push myself anywhere near as hard as I do when running.

By mid-February, the pain in my back had subsided significantly and I started to work in 30-minute runs every other day. Over the next 4-5 weeks, I steadily increased the mileage and speed with the target to race at the Eastleigh 10k. While my legs weren’t exactly used to running, the cross-training had helped maintain a decent level of fitness.

Having not competed for 10-weeks, I was well up for a race at Eastleigh. Conditions were absolutely freezing and a little breezy. After a fairly quick first kilometre, Ross Murray (who eventually won) broke away with a couple of other runners, leaving myself in a group of three along with Dave Norman and Kyle Hackett. This certainly helped to maintain a decent pace and push on hard over the whole distance. My lack of speedwork meant that I struggled to put up a decent fight over the last 400m, but I was pleasantly surprised to finish in 31:22…..perhaps all the rowing transferred better than expected. 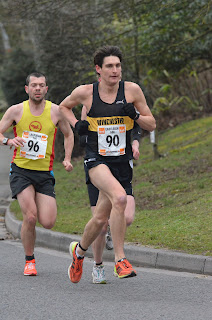 Today I ran in the Maidenhead Easter 10 mile. Again it was cold and windy, but at least sunny. There was not quite the same depth as at Eastleigh and perhaps I started a bit quick trying to keep up with Olympian Anuradha Cooray. Having gone through 5 miles in little over 25 minutes, I lost a bit of concentration from 8 to 9 miles and eventually finished 3rd in 51:59. I probably need to focus on some strength endurance now but it seems that running is certainly now moving in the right direction again.
Posted by Andy Greenleaf at 11:35