What is with me and falling off bikes? Yes, this week I had another accident on my bike. Someone who'd had a few drinks decided to cross the road without looking just as I was cycling past and I had nowhere to go but straight into them (they came off fine). A trip to A&E, 5 stitches on my chin, a bashed calf muscle and a few other grazes has sidelined me for the week, but I'm hoping to be running again in the next 7-10 days.

I'd just come back from warm weather training in a resort called Las Playitas in the Canary Islands. Its a really good set up with some great running trails, gym, sportshall and 50m pool, and it alowed me to put in a solid week's trainign along with a load of sleep and relaxing. While I was there I read Seb Coe's autobiography 'Running my Life' and here is a short review of what I thought of the book: 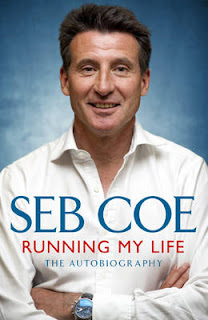 From setting 3 world records in the space of 41 days to being one of the key figures to deliver the 2012 London Olympics, Seb Coe has some significant achievements to his name. Unlike many celebrities, Seb Coe started to achieve big from a relatively young age; he was just 22 when he broke his first world record. This makes his autobiography a thrilling read based upon his achievements from the past 30 years.

The book is essentially split into 3 main sections: his life as an athlete, his life as a politician and his role in the run up to the 2012 games. It provides an insight into what is required of a full time athlete, his relationship with his father (who was also his coach) and the influences of others within athletics to make the early 80's possibly the most competitive period for middle distance athletics.

We read about his time as an MP and the difficulties he has in balancing both work and family commitments. For me, this was a part of his life that I was most unfamiliar with. However, from reading the book, it is clear that the skills he learnt during this period were instrumental in helping him deliver the London 2012 Olympics.

And finally we are reminded of his role at the Games, how the bid was won in Singapore in 2005 to the closing ceremony of the Paralympics. It's fascinating stuff, and also brings back memories of a great summer of sport. There is still a gap for somebody (such as Paul Deighton, CEO of LOCOG) to do a complete analysis of the games, however it's quite right that Seb Coe does not go into this great detail here.

Likewise there is limited controversy in the book, and I would not expect it to appear in an autobiography for somebody with potentially so much high level exposure ahead I them. However, it does recognise events that have indeed challenged the author and leaves the reader to research further on them if required. As a runner, there were large parts of the book that I could directly relate to, but I would think that a non-runner following sport and sporting achievments would find it just as interesting.

Who knows what else he might achieve? President of the IOC is possibly up there but, even at the age of 55, this book still describes a very interesting life so far and is definitely worth a read.

I'll leave you with a clip showing some of the battles between him and Steve Ovett from 1980: http://www.youtube.com/watch?v=txkz8VLO3iE
Posted by Andy Greenleaf at 00:43