For the past few years, I’ve taken a week long cycling trip with a group of friends to various places around Southern Europe and North Africa. The concept of these trips is simple: find an airport where British Airways flies to (as BA take bikes for free) and is likely to have some good weather, book the first and last night’s accommodation there (so that we can store our bike boxes for the week), and then cycle a 5/6 day ride around the region. This year we chose to go to Naples and explore a route heading east passing through the Monte Picentini and Gallipoli Cognato National Parks before heading back to the Amalfi Coast.

Given that Naples sprawls for miles and miles, we took a train out to Salerno to avoid having to deal with the city traffic and started the cycling from there. The region by the coast is dominated by Mount Vesuvius that, in AD 79, erupted and famously engulfed the cities of Pompeii and Herculaneum. The volcano has now been dormant for almost 70 years and remains an impressive backdrop to the area.

Leaving Salerno and heading towards Melfi, we were soon at well over 700m on the quiet roads through the Monte Picentini National Park. Being day 1 and feeling fresh, we were able to climb these hills with relative ease and arrived in the town of Acerno for lunch. One thing we have refined over the years is the amount of luggage we take; quite simply a pair of trainers, change of clothing, toiletries and some tools is adequate for a 5 day trip. We each manage to fit all this into a small rucksack or panniers attcahed to the seat post, and pick up any food and water en-route; this leaves the bike light and easy to control that is particularly beneficial when you’re climbing and out of the saddle. 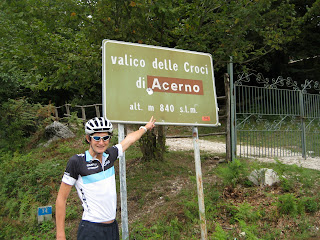 Having left the tranquillity of the National Park, we joined a main road that took us towards Melfi, keeping a steady 20 mph for couple of hours as we capitalised on the gradual descent that we had earned from the morning’s climb.

It seems that every town we visited in Italy was on a hilltop, with Melfi being no exception (c. 500m). This meant that the first 10 miles of day 2 were dispatched fairly quickly, before climbing for the next 40 miles towards our lunch stop at Tolve. Having refuelled, we were ready to take on the 3 significant climbs planned for the afternoon, which involved about 1400m of ascent and 45 miles of cycling.

We’d planned our route online in advance (www.bikeroutetoaster.com) and had downloaded it on to a Garmin. This meant minimal time was spent looking at the map and deliberating over which direction to go and this proved to be a great asset to the trip. However it can mean that you rely too much on technology and loose sight of where you actually heading. Having just lost about 300m and clocked up a decent 35+mph in the process, we realised the route we’d planned had us on a motorway and the only option was to return to the top of the hill and take a different route. You can always trust the map though. 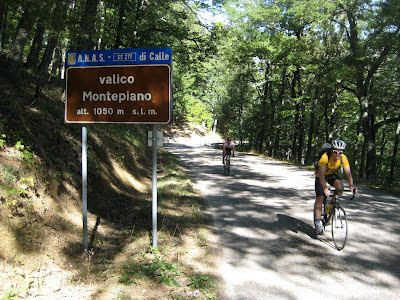 We finished the day at Pierterpertosa just as it was starting to get dark, shattered but also slightly apprehensive about tomorrow’s epic cycle.

It was naive to assume that staying overnight at 900m meant a downhill start, quite the contrary. Over the course of the next hour we hit the high point for the trip at 1200m as we cycled on small roads that wound their way through the trees in the Gallipoli Cognato National Parks. This was cycle scenery at its best. Although, being on quiet roads comes with two issues: firstly, pot holes occasionally appearing and needing to dodge; and secondly, dogs guarding their owner’s property, again occasionally appearing and needing to dodge.

The hills were relentless, not once over the course of the morning were we on flat road. Instead the roads wound through tunnels at most 500m long, through more hilltop villages and we were finally beaten when the gradient hit 1:3 and had to dismount. When we stopped for lunch at about 3pm, we exhausted the bar of all their pizza, and demolished a load crisps, chocolate and coke, a staple diet of amateur cyclists! 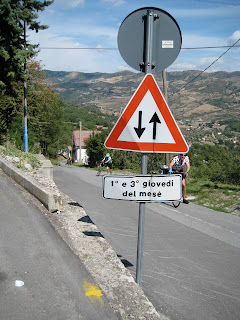 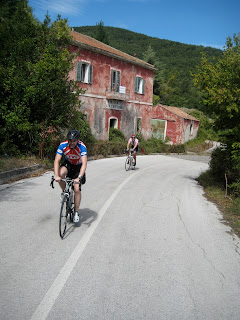 The day finished with a 30 mile descent from 1100m down to the town of Sapri, taking in the sunset whilst trying our best to keep up with the speed of the cars. 3 days down, 280 miles and 7000m of ascent had certainly taken a lot out of us. It puts a perspective on how impressive the tour riders are who complete, on average, about 110 miles per day and ascend up to almost 3000m in a day over a 3 week period (see some of the 2012 TdF stage climbs here).

In Sapri it was far busier than in the hills and also a couple of degrees warmer. The appetite for cycling had diminished a little by day 4 and, when we realised that once again the planned route had us going down a motorway, we were happy to jump on a train that took us 40 miles up the coast. After a relatively leisurely day of cycling, we arrived in the B&B well before sunset.

The final day took us along the Amalfi coast. All we’d heard about this road was that it was very impressive but also dangerous for cyclists. Ironically, it was the place where we saw the most cyclists of the whole trip and, as long as you don’t mind the numerous coach loads of tourists passing you every now and then, you’ll be fine. The views were amazing and certainly lived up to expectations; much of the road is cut into the side of the cliffs, so it means there are sharp drops down towards the sea as it winds along the coastline. Words don’t really do it justice, check out the pictures and essentially that is what its like for 25 miles. 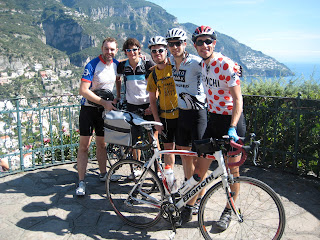 We completed the trip in Sorrento and then caught a boat across the bay back to Naples. I’m not sure of exact stats for the trip but it was just under 400 miles and about 8000m of ascent; the only mechanical was one puncture between the 5 of us. I can definitely recommend heading to this part of Italy for some cycling, but prepare yourself for some hills!